Interview with Catio2, a finalist of Smogathon 2018 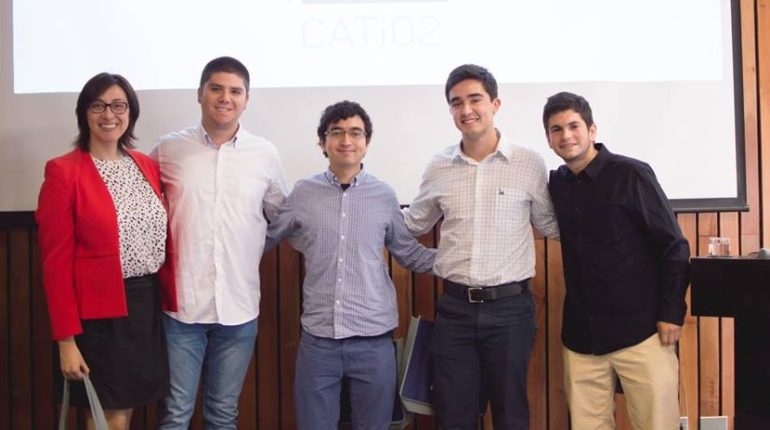 Kamila Knap: What is Catio2?

José Galaz Ortiz (CEO) and Iván Gutierrez Ariaz: Catio2 it’s an environmental company which created a transparent film which purifies the air using solar or artificial light. This film can be used on windows or walls and it allows people to decrease the disease precursors.

We started with the idea in 2016, and by 2017 we managed to complete the full team. José Galaz Ortiz (CEO) and Iván Gutierrez Ariaz made internships in the USA. José participated in nanotechnology research for eliminating sea pollution at University of Texas in Austin, while Iván engaged in mechanical design at Texas A&M University. Catalina has years of experience in reactors design and lab work, and Mauricio in innovation, so we had a great team to create this product. We also started cooperation with Cedenna (Nanotechnology Center at University of Santiago) in order to test all the properties of the film, and with Caja Los Andes and MBA UC, who help us with creating a business model and with entering to the Chilean market.

Can you explain how your technology works? What kind of products and services Catio2 offers?

Our technology uses the photocatalytic effect to eliminate pollutants. Solar or artificial light serves as an energy source to make a reaction between NOx or VOC’s (these air components are toxic and increases the possibility of people getting sick), which transforms them into non-toxic elements, such as N2. That’s how we purify the air.

Now we’re working on two applications of this technology: our main product is the transparent film which can be used on windows or walls and which purifies the air in indoor environments (or outdoor, depends on in which part you put the film). Also, we have a small version of the film (adapted to cell phones).

Can you tell a bit about the co-founders?

The four of us have a lot of motivation in creating products which help to eliminate the pollution, both the indoor and the outdoor pollution (smog), because we think that people deserve to breath clean air.

Catio2 changes the way of purifying the air both in home and in environment. Today almost every solution is focused on filters and humidifiers, but thanks to Catio2 you don’t need to use extra energy to clean your home, you just put the film on a surface and let it purifies air using the light. We created a transparent and safe product, so it can be adapted not only to the surfaces in your home, but in the future to every surface: for example, inside your car, making your car trip healthier.

How did you come up with an idea to start Catio2?

The first innovation was a concept. In Chile every solution for the pollution problem is focused on creating something really big for solving a big problem, but this approach causes a lot of complications. I thought: “maybe we could create something small, but with big applications, so it could be installed  on every surface in the city and with that, we could clean the air in the whole city”. That’s how we created the concept of the transparent film - because it can be adapted to every surface.

Once the concept was created and it became scalable, we started to seek funds for further development. We focused on two main groups of clients: companies who want to get environmental certifications and individuals. First, we started with a small film for cell phones and with that we are able to validate the concept in order to get new funds necessary to create more products.

When your technology will be ready for the commercial market?

Our technology is on the verge of becoming ready for its market entry. Next month we will send our MVP in order to receive an ISO certification. With that, we will be ready to sell our first films on the commercial market.

Is your solution suitable for the markets all around the globe or it needs some country-specific adjustments?

It is suitable for all markets of developed countries, because all of them have a large amount of mobile phone users and alsodue to the fact that the number of buildings’ owners who want to receive an environmental certification has been growing constantly in those countries over the last years. Our challenge for the future is to reach poor countries, which are particularly suffering from the pollution of air.

What are the company’s goals for the future?

Our first goal is to enter to the Chilean market with our first product (cell phone film), since that will allow us to keep developing and become recognizable. After that, our challenge will be to enter to construction market  and finally, to internationalize our films, to purify as much air as possible around the world!

Any advice for those who are about to start their entrepreneurial journey in anti-pollution technologies?

Believe in yourselves! This is not an easy path. But don't give up! What you are trying to do is solving one of the biggest problems of our planet. If we achieve our goals, all the effort will be totally paid off. Also, you will find out that there are several organizations, people and a whole community ready to help you with reaching your goals!